(Image from Santa Monica Civic Center Parks.  All Rights Reserved.)
Today is the first Community Workshop / Open House for the Santa Monica Palisades Garden Walk + Town Square project.  The Workshop will include a presentation by Field Operations, the lead design consultant for the project, and a number of activities to engage the community.  Further workshops are scheduled for September (Concept Design), November (Schematic Design) and January (Design Development).  More information is available at the project website:


You're invited to a Community Workshop + Open House + Site Walk on July 24th from 1 - 4 pm (presentation at 1:15 pm).  This is your opportunity to meet the Design Team, led by James Corner Field Operations, and make your mark. Kids are welcome.

(Image from LA Times, courtesy of Rios Clementi Hale. All Rights Reserved.)
The Downtown Civic Park project in LA has been both a great hope for the city, and also a paramount example of the problems with retrofitting LA.  However, Rios Clementi Hale continues to strive forward with the project, and their comprehensive design for the site is promising to become a reality very soon.  Not only is groundbreaking on the project starting on Thursday, but Christopher Hawthorne at the LA Times provided a great look at some of the prototypes for the project, courtesy of the project's designers.

As the Civic Park downtown edges closer to a Thursday groundbreaking ceremony, its designers, Rios Clementi Hale Studios, are putting the finishing touches on a number of design elements. Most striking is a series of street furniture including chairs, benches and tables in a shade of hot magenta. Two of the chairs are shown above.

According to Mark Rios, who is leading the design team on the project, the first pieces of architecture planned for the park are a pair of support buildings. Executed in a simple, modern style, the buildings slide small interiors and shaded outdoor areas beneath sloping roofs. One, holding a cafe, will be located at the western end of the park, near Grand Avenue; the other will sit near Spring Street.

Hawthorne also offers a great discussion of what grand future the park might present for the slowly, but steadily, reviving core of Los Angeles. Hopefully some of the aspirations can become reality, but regardless, the park should offer a great showcase of design in LA, and the work of Rios Clementi Hale.  I will be excited to see the final product, and how it partners with other efforts to transform LA.

(Image from LA Times, courtesy of Rios Clementi Hale. All Rights Reserved.)
Posted by Brent at 10:16 PM No comments: (Image from Evan G. on Flickr.  All Rights Reserved.)
Stumbled upon this photostream while on LAStreetsblog.  It showcases the new bike corral installed at the Santa Monica Public Library, replacing two parking spots with 18 parking spaces for bikes.  Nice, simple action to encourage biking even more in already bike friendly Santa Monica.
Posted by Brent at 3:40 PM No comments: 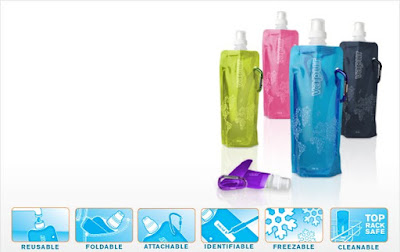 Image of Vapur Anti Bottle - from ConstructLA.
Dwell on Design was last weekend here in LA.  Sadly, I had a number of commitments that prevented me from attending, but another blog, ConstructLA, has a nice recap of their top 5 products from the expo.
Posted by Brent at 3:33 PM No comments:

This blog is dedicated to ideas, issues, and inspiration concerning landscape, urbanism, design, and sustainability in the los angeles area from the perspective of an aspiring landscape architect.